Last year, in March 2018, I awoke to a thunderous thought: The time is now!

At first, I thought this was a nudge to write again after years of putting it off.  In my first few attempts, I found myself staring at  a blank screen on a computer at the local public library. The words would not come to the forefront. The trauma I had experienced had hijacked the part of my brain that accessed words that used to come so easily to me. When I finally did manage to write a paragraph, which took me hours, I found that it had mysteriously vanished due to a “computer hiccup” (the librarian’s words, not mine). I could think of a saltier expression.

A hiccup once, but three times was plenty for me to get just a little agitated. This was like taking direction from an invisible drill sergeant who gains secret pleasure in tearing out my writing from a notebook and saying , “Start over, and when you finish with that one, then begin again.” I was not pleased with this practice, but at least I was alerted to the unseemly truth that I was a writer who’d forgotten how to write. So, practice makes perfect, I guess—or at least, that’s a positive way to look at it.

Late that summer, I had my brain mapped at a neurofeedback center in Colorado so I could receive treatment to improve brain communication that had been compromised from the traumas I had experienced in the last few years. My sister had success from this procedure in reducing anxiety when speaking in front of crowds for work, and research has shown improvement for people who are debilitated in some way that is challenging them in their ability to have a happy life. The brain map is an important tool used to evaluate brainwaves and identify ways to improve communication between various regions of the brain. It basically captures a window of brain activity, analyzes the data, and creates a visual picture for each lobe of the brain and each specific brain wave (Delta, Theta, Alpha, Beta). I thought this might help me open up my verbal processing center, create a plan to stick to becoming stronger, and ease my anxiety.

The results were interesting and in line with what I had described to the clinician. I was in my head too much and showed a lack of focus and low verbal processing. Unfortunately, I jetted out of Colorado to Florida the next month, due to my exhaustion in dealing with my son by myself. The brain map is something I can keep for my records, however, as a source of information to give to another mental health professional. Or perhaps begin a neurofeedback treatment plan recommended for me later on down the road.

This was not my first attempt to getting help. Initially, I received funds for therapy from the city of Denver, where the crime was committed. I did a certain therapy (I can’t remember the name) involving role playing. Each chair symbolized a person involved in my story. The therapist and I created dialogue, but I can’t recall much beyond that. Nor do I recall it being particularly helpful. The energy toward the divorce process likely pulled me away, plus I had a traditional therapist, who agreed that I should move out of state for safety reasons.

Reasons For My Prolonged PTSD Symptoms:

• Betrayal: A link between someone I trusted and the perpetrator.
• Prolonged connection to husband because of the children’s link.
• Back-to-back traumatic events: sexual assault and divorce .
• Selling the home because of divorce, fear for my well–being.
• Moving out of state to start over in order to avoid negative memories.
• Children manipulated as to the truth of the situation.
• Buying and selling home again because of unforeseen outside circumstance.
• Avoiding getting help from a trained professional long-term.
• Denial of my abilities to make big decisions.
• Hormones were out of whack.

Things I Wish I Had Done After Sexual Assault and Divorce:

• Stayed in the family house to keep as much as possible the same as before the divorce for me and our children.
• Healed PTSD by: writing, talking to someone who understands, trying different body work practices like Reiki or massage.
• Neurofeedback for anxiety, language issues.
• Grieved individually and stayed put through my children’s grief.
• Built a strong connection to other women going through similar processes.
• Deepened spirituality.
• Developed mindful practice.
• Healed my sexuality with specialist in pelvic trauma.
• Took smaller steps toward independence instead one gigantic one.
• Stopped blaming myself.
• Forgiven myself.
• Forgiven my husband, perpetrator, lawyers, and others who took advantage of and deceived me when I was vulnerable.

The words the time is now are profound for each individual.  I find that this phrase is timeless, meaning different things as I move through different stages in life. Last year, this phrase meant it was time for me to awaken to the truth about the lack of my writing abilities after the trauma. And, even more recently, it referred to my internal awareness that it was time for me to take fresh steps toward writing because of a picture that I sought out to be my first writing prompt.

What does the time is now mean to you? Becoming kinder to yourself and others, starting a new business your proud of, bringing a child into the world, smiling and saying hello to a stranger, or perhaps, saying no, to yourself, someone you love, friend, neighbor, stranger, or, institution because you feel this truth bubbling up inside to rise up against the tide?

I AM not my past, but my past is part of my history and has made me who I am today. 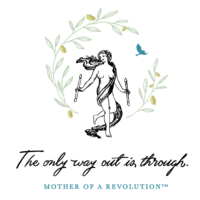 Mother of a Revolution™